I was always curious how this can be that so much would be borrowed from French if English has 1 million words and French has, what, maybe 100,000 tops? Rome invaded England before France did, and there were also the Danish, Norwegian, Greek and Dutch influences, and also English is a Germanic language itself, closest to the endangered language Frisian.

Well, we’re straying away from French stuff here as we’re going to talk about the English language mostly, but as it’s a topic that I love, bear with me. 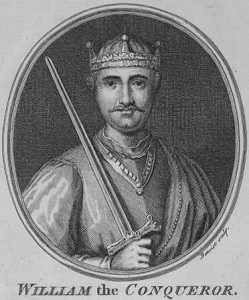 Let’s start by getting your numbers correct. Whoever told you that English has one million words was clearly delusional (or a bit too biased?). While it’s hard to count the number of words in any language, especially with languages like English that can create new words easily by linking two words (is “hot-dog” one word or two?), here is what the Oxford Dictionary has to say about it:

A few lines later, after having added a few types of words (technical terms and such) they conclude by “a quarter of a million distinct English words”.
I feel that this is a realistic number. Of course, I’m sure one can get to one million when adding concatenated words (that’s “hot-dog”), words from dialects (which are clearly not English as they’re dialects), words from old English and whatnot, one can get to a million, but let’s stay realistic here and let’s stick to English (no dialects) and contemporary English (no obsolete words), and let’s say 250,000 words.

Among those words, a conservative estimate for the number of words from French origins is about 50% (although the truth may be closer to 60% if not 70%, but let’s stay conservative on this topic). And no, I don’t separate French words and Latin words as some statistics do, for two reasons:

As far as French is concerned, it seems harder to find an accurate number. The very web 1.0 French Academy’s website stays as vague as it can and mentions the number of words found in dictionaries (a number which has nothing to do with the actual number of existing words), other websites here and there give numbers ranging from 30,000 to 100,000. This huge discrepancy comes most likely from the fact that French language Talibans would rather blow themselves up than accept words like “parking” as French words.
In any case, it’s a fact that French has fewer words than English, and yes it is true that English is most likely the language that has the highest number of words in the world.

Don’t get too cocky though, this doesn’t mean anything in terms of richness of a language and let’s not even think about going in the direction of “superiority”.

What it tells us is one thing and one thing only: English is a “mutt language” finding its origins from many other languages; also it is one of the languages that accepts the most easily foreign words and brand new words in its lexicon.

I know, I haven’t really started to answer the question yet. I’m getting there.

First I need to tell you briefly about:

The history of the English language

I’m giving you an abridged and simplified version.

So 2,000 years ago, Britain was populated by Celts, and they spoke various Celtic languages. In the 1st Century, the Romans invaded the island. They tried to impose Latin, but it didn’t take as well as it did in other Provinces, namely the ones that were going to become France, Spain and Portugal later on. However, it doesn’t matter whether Latin took on or not because soon after the Roman Empire collapsed and Germanic tribes invaded both England and France (I’m talking geographical spaces here, they didn’t exist as countries yet). However, linguistically speaking, something very different happened in both areas. In England, while they kept some Latin and Celtic words, the dominant tribes, the Angles and the Saxons imposed their languages on the local populations. Latin disappeared more or less, Celtic languages survived only in Wales, Cornwall (and still do today) and Brittany (yes, in France) where some Celtic tribes flew after being invaded by the Angles and the Saxons (who originally came from what is Germany today). In the meantime, in France, the Franks did something that was unheard of (if you can find another example throughout history, I’m interested), they gave up their own language and took on the language of the people they invaded, which basically was Latin (although Latin in the 5th Century was already quite different from Latin in the 1st Century BC) and which eventually would become the French language.

Back to England, the next six Centuries were spent with people speaking Old English which was more or less the language of the Angles and Saxons, with some evolution (remember languages evolve constantly, they’re not frozen in time, for example, Old English in the 6th Century is very different from Old English in the 10th Century). During that time, we must also mention some Viking invasions that influenced Old English a little.
And then we have the big turning point in the history of the English language:

The year 1066 and the Norman Invasion

The Norman, despite their Viking ancestry, lived at the time in France, had done so for about two Centuries and spoke French (11th Century French of course). When William took over England, he obviously brought his language with him, and during the next four Centuries, England basically had two languages that slowly merged into one: Old English for the people, French for the ruling classes, and finally both gave Modern English. During that time don’t forget that France and England were more or less constantly at war, territories on both countries changing nationalities constantly (for example, Aquitaine was English for a long while).
In the 15th-16th Centuries, ties with the French language were definitely cut (yes, England was that pissed to have lost the 100 hundred years war, it was its way of pouting, completely stopping using French) and both languages went their separate ways (not really).

However, during those four Centuries, many many French words were incorporated into the English language, almost all of them really. Two reasons for that, first the aforementioned fact that French was actually the native language of part of the population, also, it was the time during which France rose as the leading nation in Europe in terms of culture, science and pretty much everything else.

Because of that specific reason, the number of French words being included in the English language was much more important than the number of preexisting Old English words of Germanic, Viking and other origins. Why? Remember, an average individual will use 3,000-6,000 words in their daily life, and Old English may not have had that many more words in its lexicon (disclaimer: this is just an assumption from my part, I skipped the research for that particular point, if an Old English specialist wants to pitch in, they’re more than welcome to do so).
See, during this whole time the English nobility spoke French and the people kept on speaking Old English (which had become Middle English then), the consequence being that today, most everyday life words in English are the ones from Germanic origins, the ones from French origins being the ones used for more specific, complicated, scientific topics and issues.

Actually “every” and “day” are Germanic words, “specific” “scientific” and “complicated” are French words. I just realized it as I typed the sentence.

Another reason why there may be more words of French origin in English than there are French words could be that a lot of Old French words have disappeared in the French language and still exist in English.
An example? Where do you think the word computer comes from? From the French word “comput” which has to do with counting dates when doing a calendar (you know, those dates like Easter that change from one year to the other). Nowadays in France, almost nobody knows that word except for people whose job it is to calculate dates when doing calendars and language geeks like me.
Another even more interesting example? The word “sport”. We also use it in French and it’s clearly an English word, right? Well, not so much… “sport” in English comes from “desport” in Old French, a word totally gone from the French language today and that meant “game” or “entertainment”. So we have a word in French “desport” that went to England, became “sport” there while disappearing in France and a few Centuries later coming back to France as “sport”.

There is definitely more to say about this topic, but in short, this is why there are so many French words in English.

What do French people think of American accents in French?
I can speak French but I can't understand it. What should I do?
What do the French today think of the Huguenots back then, especially during the 16th Century War of...
Marianne

18 Responses to “How this can be that so much would be borrowed from French in the English language?”