(asked by Ismael from California)

Here in America, it is very rare for men to wear capris. The only men I have seen wearing them are gay men and some rock-climber type men and even those are few. My cousin worked at Eddie Bauer in the same outlet that I work at and the French men were always asking about the capris. The funny thing is that they only had capris for women and she had to explain that every time someone asked about it. Why are capris so popular in France? What is it about them that appeals to many French men? Is it a comfort thing or a fashion thing? Or something else? 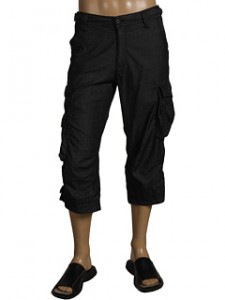 I also have a question for you: What’s wrong with American straight men and them not wearing capris?

The issue is pretty simple? When it’s hot outside, how can a man stay stylish and still not being too hot?

Men capris are relatively new in French fashion for men, I’d say 10 years give or take a few years, but they changed France in the summer.

Back in the days, when hot weather was here, men had two options: wear pants and be super hot or wear shorts and look stupid.

They had to find a way to still look stylish and not be too hot. Jean-Paul Gaultier tried to launch the man’s skirt, but it didn’t take. I mean, French men like to be stylish, but there are limits.

So the logical thing to do was to take a pair of pants and make it shorter, but not so short that it becomes stupid looking (i.e. not above the knee). Tadah! The men capris were born!

I’m not sure what else to say about them, except that they’re super cool, comfortable and stylish, and I really don’t understand what American straight men won’t wear them. But we all know where American straight men’s fashion sense here. Well, actually, no we don’t as it’s nowhere to be found.

And in case you’re wondering, yes, I own several pairs, including one that really looks like the one in the picture. My favorite one is also quite wide (almost like skater shorts, except that they’re not skater shorts) and they kinda look like Hobbit pants. How awesome is that?

Is it normal for two Frenchmen to walk around in their tighty-whiteys in the hostel room they share ...

22 Responses to “Why are men capris so popular in France?”