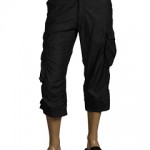 (asked by Ismael from California)   Here in America, it is very rare for men to wear capris. The only men I have seen wearing them are gay men and some rock-climber type men and even those are few. My cousin worked at Eddie Bauer in the same outlet that I work at and the French men were always asking about the capris. The funny thing is that they only had capris for women and she had to explain that [Read the rest]